“I will cry out like a woman in labor, I will gasp and pant,” declares Yahweh. Isaiah 42:14

It is the stunning announcement that God, groaning like a woman in labor, will soon give birth to new life.

It’s an unexpected metaphor for God because in the ancient world no one was more vulnerable than a birthing mother. The instances of death during childbirth were high. Women gave birth in a standing, kneeling or squatting position (probably a combination of these as the birth progressed).

In many accounts they are described as squatting or kneeling on brightly painted birthing bricks over a specially dug hole, or they sat on a birthing stool or chair. In the Roman world there were special birthing chairs with a U-shaped hole in the seat and supports for the feet and back. It is believed that well-to-do Jewish women in the later biblical period would have used these too.

Like a vulnerable woman in the final stages of labor, God’s silence during Israel’s defeat and captivity had been taken for powerlessness. But God’s seeming absence wasn’t weakness. It was gestation. Now, Yahweh will cry out as if in labor, birthing a new future for them.

In fact, while a woman might be at greater risk during labor, her apparent helplessness shouldn’t be taken as anything less than the extraordinary power to bring forth life. This is the metaphor God chooses to describe the profaned absence the people of Israel had experienced in exile, and it beautifully describes the work of God throughout the ages—showing strength through weakness.

Some people today have referred to the church’s current situation in the West as being a kind of exile. Christians haven’t been carried to a new land, but the culture around them has changed. It is not uncommon for Christians to feel as though they’re building their houses and planting their gardens on foreign soil. It’s as if the land beneath the church’s feet has shifted over recent generations and they feel a desperate need to hear Yahweh’s voice, to know the way forward, to trust in God’s promises for the future.

The world today is clearly foreign soil for us. As we write, IS (or Da’ish) is beheading Christians in Libya and Syria. Health professionals are laboring to control an Ebola pandemic in West Africa. America is struggling to deal with a child-migrant crisis. We live with the chronic brokenness of domestic violence, child sexual assault, family breakdown, oppression of the weak, dirty politics, unfair business practices, racism, extreme poverty, dishonest government, murder, theft, environmental degradation and many other indicators of the fissures and fractures that run through the heart of everything.

Nations are constantly at war. Societies are continually distressed. There’s a deep yearning for a different way to educate our children, and a hunger for a new way of conducting business and politics. No one believes that continuing on this same trajectory will make a difference in the healing of the world.

Like exiled Israel, the church today yearns for a word from God. As Christians, we believe that Christ came into the world to bring a new order; to bring redemption, healing and restoration; and to birth a new society of redeemed persons. And as that new society, we hold fast to the truth that God is directing history toward its true end. But like Israel, we need to hear afresh that God is at work. We need to be reminded that, though forces of chaos and evil seem evident, God groans like a woman in labor, giving birth to the new world promised throughout the generations and confirmed for us in Christ…

Do Christians believe Jesus has an answer for racism and racial inequality? Do we think the Bible provides responses to a world of violence, both domestic and international? Does it involve more than just inviting people to a church service? Of course it does!

So, the church is both commissioned and equipped to repair the fabric of society, and to serve as envoys of love, dignity, commitment, communion and grace. As David Bosch wrote, “The central theme of our missionary message is that Christ is risen, and that, secondly and consequently, the church is called to live the resurrection life in the here and now and to be a sign of contradiction against the forces of death and destruction.”

Do you have a desire to see the church altering the trajectory of culture in the way God envisions? To do so will involve new ways of thinking about community, politics, business, education, health care, art, religion and society itself. It will involve everyone, not just the clergy. It will involve not merely asking what kind of church the world needs, but what kind of a world God is giving birth to.

Tweet this: The redemptive plan of God cannot be divorced from the fruitfulness of the church.

Adapted with permission from To Alter Your World by Michael Frost and Christiana Rice. 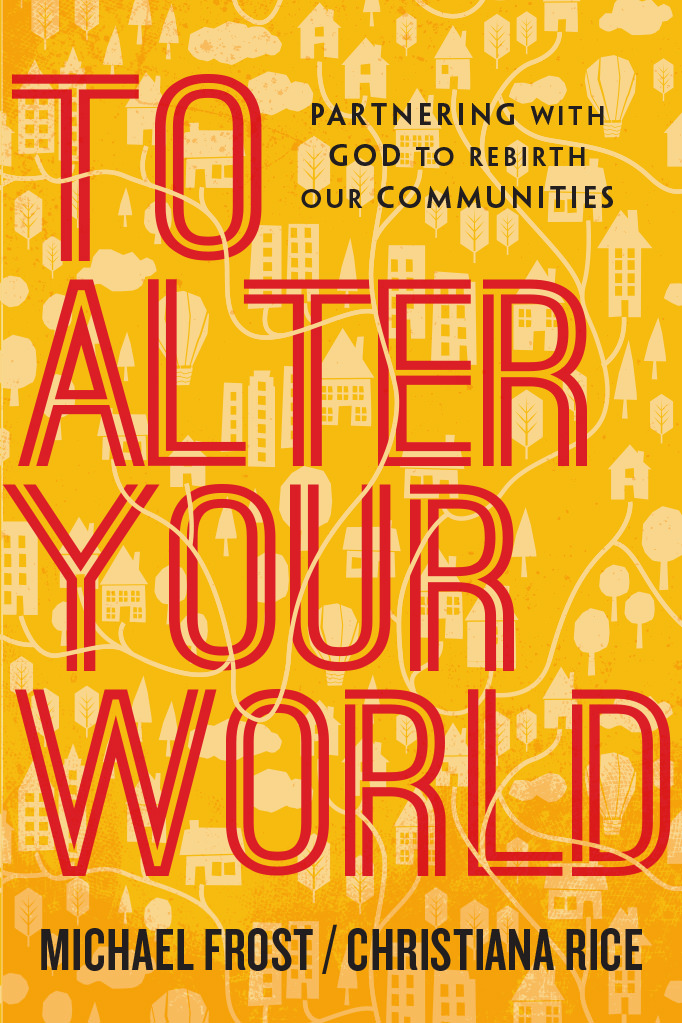 In Christ, a new world is being born and the new creation is unfurling all around us. God is directing history toward the future restoration, repair, and renewal of all creation. And our job is to cooperate with God in being a sign and foretaste of that coming world.

Renowned missional leaders Michael Frost and Christiana Rice introduce the bold metaphor of a midwife to depict us as God’s birthing attendants as the kingdom comes on earth as it is in heaven.

With groundbreaking ideas and practical illustrations from all corners of the globe, To Alter Your World will change the way you see how your church can partner in God’s world-altering mission. Nothing else could be more rewarding than laboring alongside a God who is birthing the new creation and inviting all to join in its benefits and blessings.