I see a lot of false starts, a lot of frustration and a lot of broken attempts at disciplemaking.

I’ve heard countless reasons for these frustrations and failures. We did a survey of over 5000 missional leaders and here are the 2 greatest barriers to discipleship we found: knowing where or how to start… and time.

But there are others…

Sometimes the issue is that we believe certain myths about the Great Commission to go and make disciples.

Myth #1: Disciplemaking will just take care of itself

Do you sometimes think that you can make disciples without changing anything in your daily life? Have you bought into the myth that new disciples will be made and multiplied without any kind of intentionality?

With the busyness of life, work, family, and friends it can be too easy to just assume that disciplemaking will just take care of itself.

Are your disciplemaking efforts really just dreams and aspirations, and not efforts backed by a well-engineered plan? Do you have a well-structured blueprint for effective disciplemaking?

Too often I think that disciplemaking will just come naturally – that it won’t any kind of intentionality, planning, or forethought. But without a plan or blueprint I usually just fall back into the same habits and routines. Are you the same way?

Whatever it may be, this feeling that you’re not capable can absolutely cripple your ability to make a difference through disciplemaking. It makes disciplemaking seem elusive and distant, as if it’s just reserved for the professionals.

Discipleship is not easy. Jesus didn’t say it would be.

Whether it’s barriers in your everyday life or a broken belief in what the Great Commission is, ineffective disciplemaking is a real problem.

It can cripple our ability to make a difference, derail the mission God has called us to, and offers nothing to help the survival and growth of the gospel in the world.

But here’s one thing we’ve learned from training and equipping over 2 million leaders from 100+ different countries:

There’s a problem with how we’re making disciples…

Really, the problem is that we’re not effectively multiplying disciples.

Perhaps it’s because we don’t understand why discipleship is so important. …or we don’t see the hidden, treacherous barriers that keep sabotaging our attempts at making disciples.

Or, it might be a misunderstanding of what it means to be a disciple. Maybe we just have unhealthy disciplemaking habits.

Not only that but ineffective disciplemaking may have you feeling tired, frustrated, afraid and timid, or worse – ready to quit.

But It Doesn’t Have To Be This Way

In thousands of hours with thousands and thousands of leaders we’ve discovered that most followers of Jesus really have a heart to see the gospel multiply and flourish in mighty ways.

But too many are using outdated formulas for times that have changed dramatically in recent years… they are doing the same thing over and over and expecting different results.

Too many people have never been taught the why, what and how of disciplemaking – of making a difference in the world.

We want to show you how to reverse that.

There is a blueprint for effective disciplemaking

Although this course took us years to develop, it is now only a few clicks away from you reaping the tremendous benefits. That’s why I’m sharing it with you.

Disciplemaking Blueprint is an online training program… a 14-module course that walks you through developing a proven plan for effectively making disciples.

You’ll get 14 different modules that help move you from ineffective to effective discipleship. Collectively, it will provide you with an incredible amount of clarity and confidence for making a difference.

If you are serious about making a difference by becoming an effective disciplemaker, then this training program is absolutely for you.

After going through this process, you’ll know what effective discipleship looks like, what’s currently holding you back from being effective, what you need to do right now, and how to utilize the right tools and training to be the effective disciplemaker you’ve wanted to be!

Not only that but you’ll also get… 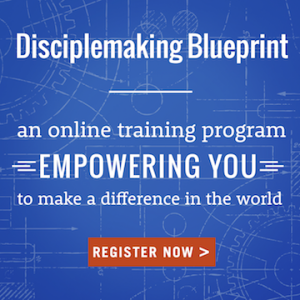 Click here to find out more about the Disciplemaking Blueprint Course.