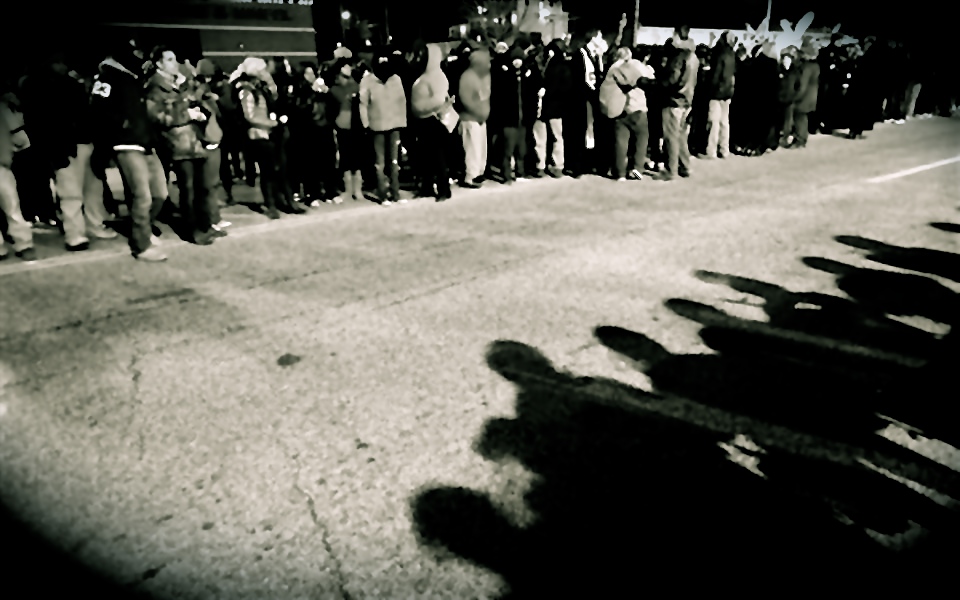 This week, as a grand jury in Ferguson, Missouri decided not to indict a police officer who had killed an African-American teenager, I observed a striking divide in the responses of fellow Christians on social media. Many African-Americans expressed grief, anger, or bewilderment over a case that they saw as emblematic of a larger systemic problem with the ways that law enforcement interacts with African-American men and teenagers. With a few notable exceptions—including from some prominent evangelical leaders like Russell Moore, Matt Chandler, and Ed Stetzer—most of the white people in my social media feed, if they were paying attention to the Ferguson situation at all, seemed focused disapprovingly on the rioting and looting that followed the decision or on defending the white police officer, with little apparent concern for the dead teenager, his grieving family, or the experiences of African-Americans. Even among people whom I know share a sincere commitment to following Jesus, the responses seemed starkly divided by ethnicity.

I observed a similar dynamic the prior week, when President Obama announced a series of administrative changes to the enforcement of U.S. immigration laws that will allow several million immigrants who are present unlawfully in the country to stay and be granted employment authorization (at least temporarily). The average response among fellow white Texan evangelicals, if my social media is a fair sample, was somewhere between skeptical and indignant: even many who would be happy for Congress to act in a bipartisan way to achieve some of these same ends were offended that the President would bypass Congress in what many consider an unconstitutional, audacious executive overreach. Some were ready for impeachment proceedings, government shutdowns, or secession in response.

Many of my Hispanic brothers and sisters though—including some whom I know to be very conservative, both theologically and politically—celebrated the announcement, which for them meant the relief that members of their congregation would be able to stay with their U.S. citizen children, deferring (at least) the fear of families being separated. Work authorization would mean that people who have come to faith in Jesus since arriving illegally in this country—many of whom have been anguished by what they saw as a necessary evil of using a fraudulent Social Security card to apply for a job or driving without a license to get to work—would be allowed to work, drive, and pay taxes legally. While I’ve not encountered anyone who disagrees that bipartisan legislative changes to immigration policy would have been the preferred course, the response among most Latino brothers and sisters to the President’s announcement has been one of gratitude. Some local churches hosted viewing parties to watch the President’s primetime speech. A poll a few days after the announcement found that fully 83% of Latino evangelicals support the President’s action.

I’m not sure whether Darren Wilson should have been indicted in Ferguson over the death of Michael Brown, and I understand the skepticism of many white pastors of the prudence and precedent of the President’s action on immigration. But observing social media over the past couple weeks has taught me that, for as far as we’ve come in my lifetime, our churches are still significantly divided by race.

The Apostle Paul describes the Church as one body, with many distinct, interdependent members (1 Corinthians 12:12-26, Romans 12:4-5). We are called to suffer with those parts of the body that are suffering and to rejoice with those that are rejoicing (1 Corinthians 12:26). We cannot possibly do so unless we are in relationship with those members of the body whose experiences have been very different than our own: too often, as a recent study reported on in The Atlantic finds, white people like me simply do not know anyone different than us. In some cases, our churches have exacerbated that social segregation.

My challenge—to myself, to my congregation, and to you—would be to intentionally cultivate friendships with brothers or sisters in Christ whose experiences have been different than our own, and then to put into practice the biblical command to “be quick to hear, slow to speak, slow to anger” (James 1:19). We may not always agree, but when we disagree we can do so respectfully and lovingly, not angrily. In many cases, we may find that listening to those who have too often been marginalized in our society (and in our churches) can allow us to discern God’s heart and pursue his justice in unity.