A few years ago, I participated in a development program through my church; the program was set up to grow women in their biblical knowledge, love for God’s word, and various doctrines. To say that this program was stretching for me would be an understatement. Even though I’ve been a believer for a while now, I struggled to enjoy the program— It’s not that I didn’t want to read God’s word more or study it deeper than I had in a long time, but it was hard. Really hard. And that made me fight and fight against my leaders throughout the entire first semester.

I will never forget what happened one night in my living room during the year I was in this program. Several of us girls were sitting around chatting about the program and one of the disciplines that they were helping us learn. We chatted about it, and I was laughing, telling them that I was not going to do it— there was enough grace to cover it for me. Continuing to laugh, I said that I knew God would forgive me if I didn’t do it, and so that’s the path I’d walk.

Looking back, I’m disgusted at my apathy towards God’s word. In the moment, though, I was tired of the program. I was tired of feeling as though I could not actually accomplish what they were asking. I dealt with my feelings of inadequacy and apathy by laughing it off and disregarding my leader’s wisdom.

And in hearing everyone’s laughter, I felt that I was validated. My blatant disregard for this discipline was funny and therefore it was acceptable..

But one friend spoke up, and her tone was different than everyone else’s. It was immediately clear that she didn’t think the way I was laughing off hiding God’s word in our heart was funny. She looked right at me and challenged me: why was my spirit so apathetic towards God’s word? Why didn’t I cherish keeping His word in my heart? I was stunned. I was mad. I was hurt. How could she call me out like that in front of all of our friends? I was sure that she hated me and thought she was better than me. 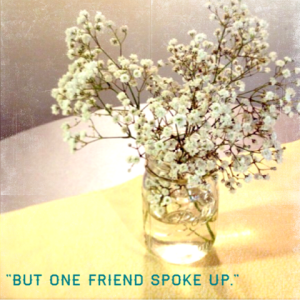 The night ended for me then. I was so hurt that I could hardly contain my emotions. I was embarrassed and I was mad. I kept wondering how could she claim to be my friend and then embarrass me and call me out like that in front of all our friends. No way she was my true friend. True friends don’t hurt you like that.

A few days later, though, I called her and we chatted about the conversation. I shared my hurt heart with her. She loved me deeply enough to apologize for the way she handled it, but she continued to stand by what she had said. I could live with that and decided to forgive her for the way she called me out. Thinking that the issue was resolved, I was surprised over the next few weeks and months as her words penetrated my heart deeper and deeper. Slowly, I realized she was right. Everything she had said was right. I was perverting the grace of God through my apathy and carelessness with his word. I was being selfish and ignorant in the way I was using God’s grace to cover my sins.

Tweet this: “Her words moved my heart towards His heart, and this matters so much more than our comfort.” @jamie_ivey #vergewomen

Looking back on this night, my friend and I now laugh. As much as it hurt in the moment, this is a conversation that spurred me on to love God more. I am eternally grateful that this true friend of mine had the wisdom to question my heart’s intentions and not join me in perverting the grace of Jesus Christ.

Her words moved my heart towards His heart, and this matters so much more than our comfort.