The Decline of the American Church

If you read too many statistics on the American church, chances are good you’ll come out pretty depressed about the state we’re in. Of the 90% of Americans who call themselves believers in the gospel of Jesus Christ, a much smaller amount would say they actually believe these things:

Of the 90%, how many do you think believe these things?

The answer is 9%, according to research done by The Barna Group on all sampled age groups of Americans in 2008. The number goes to less than 1% among Americans in the 18-23 age group. These six statements are basic, foundational truths of the evangelical Christian faith, yet “Christians” don’t believe them!

That is a shocking number, isn’t it?

The reality is that while many may keep the Christian box checked for surveys, fewer people than ever before are actively involved in churches and living out the basic teachings of the Bible.

Plenty of ink has been spilled over these kinds of issues as of late. Many leaders are predicting the decline of the American church, asserting that in the next generation the church will almost cease to exist. Some have blamed the church, some have blamed the culture, but nobody is arguing about whether a problem exists.

I’ve had my fair share of pessimism throughout the years, but when I look at this though, I see something different.

I see an opportunity for God to rekindle a zeal for His glory and I see a potential army for God’s mission in the world.

Our churches are full of people who want to be a part of something. Yes, they’re lacking conviction. Yes, they’ve been trapped in our consumerist culture. But many of them are still coming to our church gatherings on a frequent basis. Through my experience at the Austin Stone, I’ve seen God awaken many of those who fall in that large percentage who say they’re Christian but have no idea what it’s like.

Share this: “As church leaders, how can we lead God’s people into God’s mission?” @_matt_carter

I’ve come to realize the fundamental question we must answer is this: As church leaders, how can we lead God’s people into God’s mission?

There is a growing voice within different pockets of Christianity that believes the answer for how we got here is pretty simple. They look at the way we have done church for the last 200 years in this country – which is primarily a large, attractional church model – and believe that the method is what is wrong.

Let me explain what I mean by attractional church.

It doesn’t mean that we have a Ferris wheel or an IMAX theater, in case those were the images that came to your mind. I am the founder and pastor of an attractional church. That phrase doesn’t have as much to do with size as it does with its positioning with the people it is trying to serve.

This is an attractional model of church – it’s big church. This is contrasted to the microchurch model, where the net of the church is a little smaller and more focused on serving a smaller, more targeted group of people. Traditionally, this is the home church or cell-based model. This style of church may not meet on Sundays or even in a building; there is less anonymity, and the sense of responsibility within the church is more felt because the concentration of people is less.

So why are there people out there who think the larger, attractional model of church is to blame for the rapid decline of the American church? Their argument is that all of these attractional churches across America are full of believers who are simply spectators to Christianity. They are consumers who come to church to have a better week or a better marriage, but they never engage in the mission of the church or the gospel of Jesus.

As a result, they believe the attractional church has not impacted culture in the way the church was designed to do. Their solution is to completely do away with the big church model and exclusively express the church in a micro-context.

Now, I wholeheartedly agree with much of their argument, (which I will discuss in a later chapter in the eBook Released: The Power of Everyday Christians on Mission which you can get free HERE), but I think they have come to the wrong conclusion.

There are two reasons why I think the larger, attractional model of church is valuable:

I believe with all of my heart that there are still people in the United States who are going to be reached with the gospel through the larger, attractional model who would never be reached through the micro-church model. At the Austin Stone, we have countless people who worship and serve with us faithfully and have shared their experiences of coming to faith.

Story after story echoes hearts that were scared or intimidated by smaller groups, where their lack of understanding and faith were more noticeable – many said they would never have darkened the door of a small group! The larger model allows for people to come without feeling the self-imposed pressure of fitting in or knowing enough to not feel like an outsider.

They can be a part of the crowd, and the anonymity creates a space for them to come and hear the gospel – to be drawn in through an environment that is more comfortable for them. This gives the attractional church a wider net to bring in people that would otherwise never hear the gospel.

There may be some who get angry with me for this one, but I think what I’m about to say is true. There are just some things that larger groups of people can do that smaller groups of people can’t. It is the idea that greater force, greater manpower behind something can push harder and farther than less force, less manpower.

I have seen this to be true in my own context. There is a neighborhood in Austin that is the most disadvantaged and underresourced area in the city. It’s called the St. John neighborhood. In 2010, we called our church to follow the call Jeremiah placed on the church to seek the peace of our city, to cast our lot in with theirs, and to fight for restoration.

Share this: “I see an opportunity for God to rekindle His glory & a potential army for God’s mission in the world.” @_matt_carter

Now, three years later, God has done some amazing work through hundreds of partners in our church. People have moved their families into this area to serve and love their new neighbors. Hundreds of people from our church have volunteered at the local high school that was on the brink of being shut down by the state of Texas, mentoring numerous teenagers in character and faith.

While the work in St. John isn’t done, the community is different today than it was three years ago. The force of the church coming together made a difference, just like it is supposed to do.

Another example is the 100 People Network. Three years ago, we called for 100 people from our church to commit to go into nations where the gospel is virtually unknown, places where people are born, live, and die and never even hear the name of Jesus Christ.

Not surprisingly, these are nations that have been hostile to the gospel and dangerous places to live for believers seeking to evangelize. These people would have to leave their homes, jobs, families, community, and all of the things that have made their lives in this country comfortable and status quo – to go to a place that is foreign, scary, and hard.

It seems like a such a call would have gone over like a lead balloon to anyone who cared about comfort, safety, and their own life, right? But you know what? Over 100 people have committed to go and many are already there, on the ground. In fact, we’re now beginning our second round of 100 people!

Can you believe that?!

That number of people going from a single church body is a work of the Lord, without question, and the impact that these missionaries – and the senders who support them – have for the Kingdom is substantial. The attractional model mobilizes more people behind the work of the Lord in a way that increases the force and the impact that a single church body can make.

If the people in a large, attractional church can make the transition from being spectators and consumers to living on mission, God can absolutely use that church in power. He can use that church as a powerful force for the gospel in this world. I have seen Him do it, which is why I disagree with doing away with the big church model altogether.

It’s not the answer.

At the same time, attractional church by itself isn’t the final answer either. I am convinced that the current larger, attractional model of church alone – and as it is most often expressed in this country – is not the answer to seeing the church in America thrive with worshipers of Christ.

Here is why I know that’s true:

Bob Roberts is a pastor in Dallas, Texas and a good friend of mine. In 2006, he wrote a book called Transformation about how churches can transform lives and the world. In the book he poses the question: “What if in an attempt to reach the United States of America for Christ our strategy was that we were going to start 1,000 megachurches in the next 10 years?”

Think about that for a moment: we recognize the church’s deterioration in America, so over the next decade, we’re going to plant 1,000 megachurches. Now, there are 50 states, so you do the math on that: it’s a lot of megachurches. That sounds like a reasonable strategy, right? More big churches, more people in them, more growth for the American church. It seems like a no-brainer.

Surely with all those churches we could reach the country with the gospel, right?

The answer is no.

I can say that with confidence, because that is exactly what just happened. There were 1,200 megachurches started over the last 10 years, and there are even less people per capita going to church today than 10 years ago in our country! That scares me. You want to know why? Because I’m one of the guys that started one of those megachurches.

Our church is one of those 1,200, and that statement, that little truth about the trajectory of American Christianity, haunts me. It gnaws at my mind and makes me realize something that should matter to every single person who loves Jesus and lives in America.

Something is very wrong with how we do church in this country. 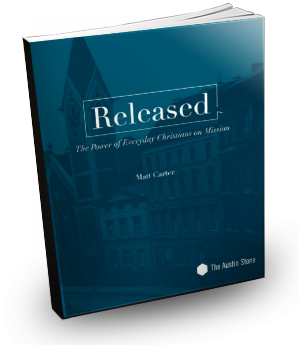 *This article is a part of a FREE eBook entitled Released: The Power of Everyday Christians on Mission.