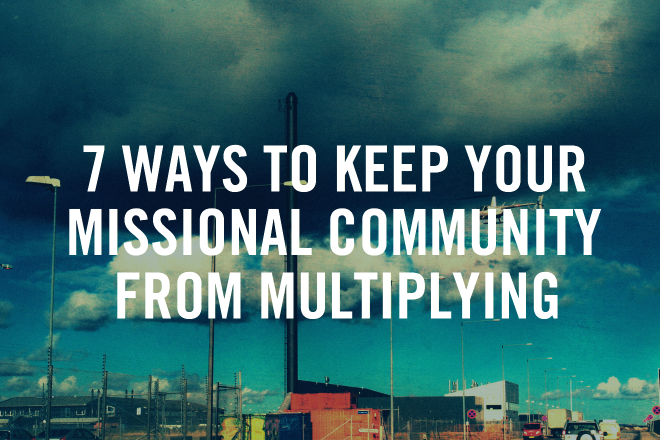 7 Ways To Keep Your Missional Community From Multiplying

A missional community (MC) can be defined as a family of missionary servants who are sent to make disciples who make disciples. When trying to understand what a MC is, it may be best described as people living as a family. So, when one has a question about the function of a MC, most of the time the answer is found by asking, “How would a healthy family answer that question?” One of the major differences found in MCs vs. traditional small groups is this idea of multiplication, which is built in the very story of God from the beginning in the very first family.

In the Garden of Eden, we see that as image-bearers of God we were made to be fruitful and multiply (Gen. 1:22, 26-28). By issuing his first “great commission,” God did not merely intend for us to have more people over for Thanksgiving dinner. Rather, he wanted his beautiful image to fill the entire earth through the multiplication of his image-bearers. But through Adam, we sinned and were separated from God.

In the attempt to author our own story, we sought center stage–pushing God’s goals for aside for our own desires. We sought to multiply our image for the sake of our own fame rather than God’s fame.

When someone repents and turns to God, it is our responsibility to show them their new mission by pointing back to the garden. We must show how their mission is all about multiplying for the sake of God’s glory, not multiplying a life that is all about them and their legacy.

What’s the primary goal of groups?

Many small groups in churches believe their goal is to get to know each other or form a close bond. This is not necessarily a bad thing. However, if this is the main goal, multiplication will never be desired. Drawing close to one another is not the primary goal of a MC; rather, making disciples who make disciples is the lifeblood of MC life. Disciples are fruitful and multiply disciples of Jesus. Drawing close to one another happens because Jesus has given us the same Father, and we are a part of the same family. So, forming a close bond is a bi-product rather than the primary goal of living together on mission as family.

If we take this idea of multiplication to how we see a healthy family, you can think of it in this way: A healthy family doesn’t stay a close family unit forever, living in the same house with no expectations of the child leaving the house. We train them up, we teach them, and we disciple them so that when they reach a certain age they are then sent out to start their own life, their own family.