Can Mega Be Missional? 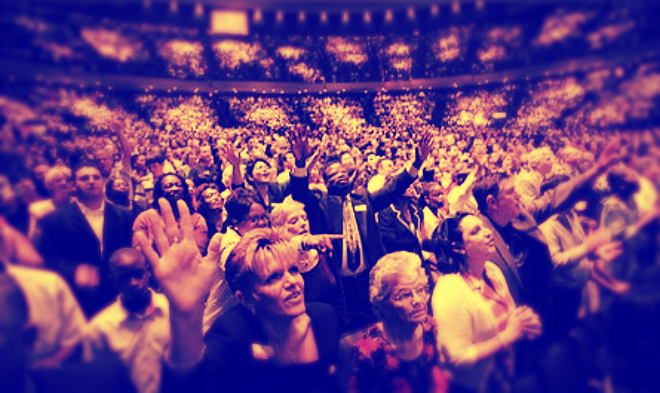 We live in a world of earthquakes.

Sure, there are real, physical, seismic changes happening underneath our feet. But there are cultural, social, political, and religious earthquakes rumbling around us each and every day. In fact, it’s been 60-70 years of these kinds of earthquakes. And like all tall buildings, when the institutions such as marriage, the church, finances or politics crash down around us, not only do we find ourselves leery to enter into these institutions again, but it creates a sea of victims.

In times of disaster, these victims, still afraid to go back into the buildings and institutions that have fallen on them, often gather together in Refugee Camps. People are disoriented. Afraid. Unsure of what’s next or how to live anymore. Their whole world has collapsed around them.

Let’s extend this metaphor a bit further to the church.

In my opinion, mega-churches are a direct consequence of the upheaval in out culture, essentially functioning as Refugee Camps for the people of God.

As you can quickly see in this scenario, refugee camps can be a problem if people become dependent on the systems of support provided. But they can also be brilliant if they exist to equip and train people for how life now is and then send them out to the other victims of the earthquake.

We’ve seen places like the Sudan and Kenyan refugee camps work really well. People rebooted their lives and are then sent out to rebuild community and life outside of the camp.

And while people with varying opinions on mega-churches may not articulate it this way, here’s the underlying question: Are we building a refugee camp or a rescue team?

It seems that many would argue Refugee Camp.

But here’s the thing that most people don’t see: It has nothing to do with size. It’s simply the culture of the Western church (or more rightly put…things intrinsic to American culture that pervade the church).

I’m not going to belabor this point. I feel like JR Rozko did an excellent job in this post. His same point was that it’s not about size, it’s that so many churches have these characteristics:

But you can have 100 people and be all about these things, can’t you?

Here’s my point: If we applaud church plants, small or medium-sized churches who are learning to embrace an orientation around discipleship and mission, we need to do the same for mega-churches.

In my work at 3DM, probably 1 out of every 15 churches we work with is a mega-church. And as my relationships  deepen with many of these leaders, increasingly I have been filled with more hope than ever before by the men and women I meet who are leaders in these churches. I cannot speak for all mega-church pastors, but I can speak for the ones who have become close friends through our Learning Community process. These friends are seeking the Lord, discerning how to shift something that can often feel 50 times bigger than the Titanic. They are having to make tough and difficult choices and commit to a way of being the church that will take more than a year or two or some silver bullet new program.

If churches are making transitions from Refugee Camps to Rescue Teams, that’s going to take some time. It’s not as if you wake up the next morning and are brilliant at it, particular when, for some, it includes a shift in ecclesiology. They won’t figure it out over night. But it’s the commitment to something worth doing and the acceptance that you may not be great at it for a while that builds the character necessary for doing it long-term. You have to live into it.

Isn’t that something we should be hoping for? Cheering for? Praying for?

Don’t we want leaders with courage, conviction, a willingness to try, experiment, tweak and seek the voice of the Lord? Hasn’t that always been the heartbeat of the church? So whether it’s a church of 100 ora church of 25,000, if a church is committed to going after discipleship that leads to mission, lets us “encourage them as long as it is called today.” Let us give them the grace that it will take to do this journey well. And with integrity, let us make it ourselves.

It is true that not every church is on this journey. That’s reality. But at the very east, we can make the journey ourselves and encourage and pray for those communities who are.