Question 4: How do you transition your small group to Missional Community?

When my brother Jon and I, along with a few friends from college, started COMMUNITY our mission was clear: â€œHelping people find their way back to God.â€ Our strategy was also clear â€“ before we would ever have a celebration service each of us would build relationships with people far from God and invite them to do life with us in small groups. My first small group apprentice was Jerry, a friend of mine who was not a believer. In time Jerry became a Christ follower and I got to baptize him. Those initial small groups were composed of people who were all a part of a community with a cause; they were on mission. Several years later our small groups at COMMUNITY have continued to be open, evangelistic and reproducing groups. Last year we baptized over 400 people and most of those people came to faith in a small group and were baptized by a friend in their group.

I often tell pastors that transitioning small groups to missional communities is really quite simple, but can also be one of your most daunting tasks. This is due to the nature of most small groups â€“ theyâ€™ve become accustomed to spending most of their time hanging out with other Christians learning about the Bible – equating knowledge of God to discipleship.

While there is much about our group life that is missional, we began to notice that many of the people in the groups were not on mission. Less than 50% of the people at COMMUNITY had an identified mission. Some of the groups were relying entirely on newcomers at one of our campuses to fill their groups. And very few groups had a clearly defined mission. This had to change. We wanted every person on mission and every group to have a mission. This drift in small group life along with conversations I was having through Future Travelers caused us to re-think our definition of mission and to re-think small groups as a missional strategy.

In re-thinking our small group strategy we were very much aware that â€œmissionalâ€ had become a buzz-word within church leadership circles. â€œMissionalâ€ often meant whatever it was that that particular leader was enthusiastic about. We wanted a comprehensive but simple explanation of the mission of Jesus. Over the course of about 18 months we concluded that the mission of Jesus could be summarized using the following three words: reach, restore and reproduce. 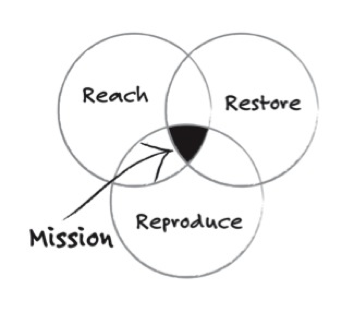 Reach â€“ Jesus gave us the great commission and asked us to reach the world and help all people find their way back to God.
Restore â€“ Jesus wants to restore his Kingdom and asked us to represent God to a hurting world and bring about restorative justice.
Reproduce â€“ Jesusâ€™ vision for accomplishing his mission would only occur through a movement of Christ followers who are living to reach and restore this world but also reproducing that in others.

With this comprehensive and simple understanding of mission we were now ready to re-think how to engage people in mission through small groups.

Many churches that are â€œgoing missionalâ€ have started calling their small groups â€œmissional communities.â€ We considered that, but we knew a simple name change would not change their identity or their behavior. I understand that the title of this article is â€œHow to Transition Your Small Group to Missional Community.â€ Mission is the goal, not a name change. For us it was too easy to issue a name change; instead we are challenging every small group to covenant to be one of two types of groups:

Group with a mission â€“ these groups have a common cause as their affinity and they covenant to all be about the accomplishment of that mission.
Group with missionaries â€“ these groups have a relational affinity and they covenant to hold each other accountable for the individual mission that God has called them to.
It is our intention that every person will present to his or her group a covenant to be on mission. It is also our intention that every group will present to their campus a covenant to be on mission.

COMMUNITY has grown from a few college friends to thousands of Christ followers at twelve campuses and a network of new churches that includes tens of thousands of people. We are grateful for all that God has done through us, but we now believe that he is calling us to mobilize every one of those people for mission, not just 50%. It is our goal and belief that in the coming year the number of people on mission will be 100% of our weekend celebration service attendance. And the way we are doing it is through groups with a mission or groups of missionaries. Some people call those â€œmissional communities.â€

More about the 7 Questions Series

Over the coming weeks, we will be asking some of the leading thinkers and practitioners to answer 7 of the most frequently asked questions about missional communities. All of the folks we’ll be hearing from are featured speakers at Exponential 2011: On The Verge. For more information about Exponential 2011, visit www.exponentialconference.org. Also, make sure to use and follow the Twitter hashtag #7questions to keep up with the conversation!

Dave Ferguson and four friends from college launched Community Christian Church, a church that is passionate about “helping people find their way back to God”. Dave serves as a resource for other churches and leaders seeking to expand through multiple church sites and provides visionary leadership for the NewThing Network, a catalyst for a movement of reproducing churches. He is also the co-founder and serves on the Board of Directors for the Institute for Community who partner with real estate developers to accomplish their mission of “helping people build quality relationships where they live and work through the power of genuine community”. Dave is the co-author of The Big Idea: Focus the Message, Multiply the Impact, Exponential: How you and your friends can start a missional church movement and the soon to be released On the Verge: The Future of the Church as Apostolic Movement, all with Zondervan.. Twitter: @daveferguson.

Join in the Conversation